The Seeker of Good Songs 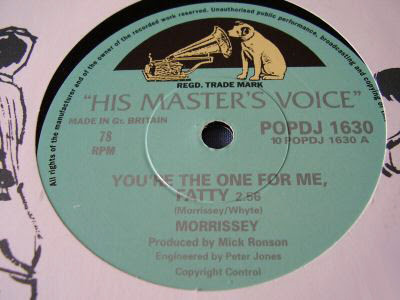 From a blog https://historysdumpster.blogspot.com/ that I used to frequent, but that now has moved mostly to FB,
I found a Morrissey mention, interestingly, this was within their last web entry (Friday, November 29, 2019).
The topic was "The Last 78 RPM Records".

The caption to the picture, " "You're The One For Me, Fatty" Morrissey (1992, UK) Image: Discogs. Morrissey was the former lead singer of the British pop group The Smiths, best known for their 1984 alternative rock mega hit "How Soon Is Now". In 1992, he released a few 78s with selections from his solo album Your Arsenal. "

From Discogs,
Notes
This is a His Master's Voice 10" DJ promo with the same track on both sides housed in an old fashioned HMV POP sleeve with titles of old HMV singles listed on the back of the sleeve.
Side A plays at 45rpm and side B at 78rpm.

I see also at Discogs, that "We Hate it When..." was a 45/78.
Notes
Issued in an old style HMV 'Pop Series' cover with catalogue singles advertised on back.
The same track plays on both sides with different speed (side A: 78rpm / side B: 45rpm).

Anyone know why the 78 RPM pressing? Is it a DJ thing? Did it have to do with the HMV POP sleeve with titles of old HMV singles?
"If I knew where good songs came from I'd go there more often." Leonard Cohen
"I’ve always held the song in high regard because songs have got me through so many sinks of dishes..." Leonard Cohen