I've not heard the song but the lyrics are highlighted in the Mojo review of Heaton's new album, 'Manchester Calling'.
Marr is praised for being 'cool'. Profound stuff!
John M

Update:
The review being cited via FWD. 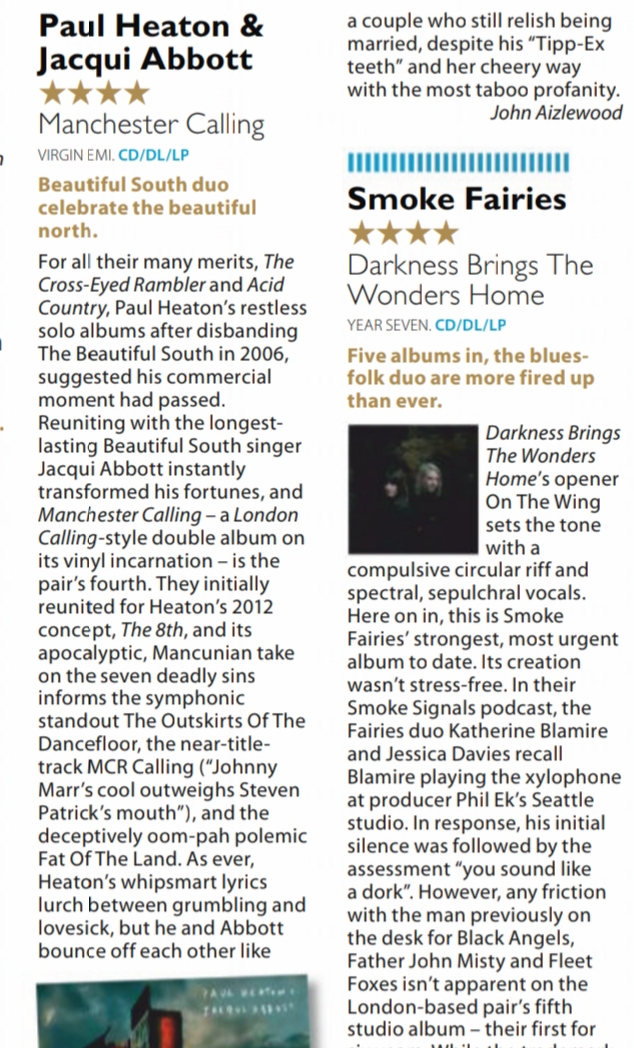 Young And Alive said:
One swallow doesn't make a summer.
Click to expand...

Do you want elaborate on that cryptic comment? To what extent does your commentary favour Morrissey?

Uncleskinny said:
Well when Morrissey continually trumpets minor triumphs, and doesn't sell out his Leeds Arena date, I'd say Paul Heaton has the upper hand here. He sells more songs than Morrissey, and he sells more tickets than Morrissey. By any measure you like, he's more popular. So I'd say he has every right to slag off an act he sees as failing and bigoted. Because he's right.
Click to expand...

Do you think Heaton will get a week long Vegas slot at Cesars Palace?
I'm a gonna rearrange your face!
[SIGPIC]

Ugly Devil said:
Do you think Heaton will get a week long Vegas slot at Cesars Palace?
Click to expand...

Ugly Devil said:
Do you think Heaton will get a week long Vegas slot at Cesars Palace?
Click to expand...

Is Morrissey doing that, hopefully he is but he also said he would be delighted to play a one week residency in Harlem this May?

Here's the link to Heaton's solo album page on Wikipedia.
https://en.wikipedia.org/wiki/Paul_Heaton_discography#Studio_albums
He's had 3 - they reached 95, 43 and 51 respectively. An absolute commercial disaster.
Performing solo live, he was restricted to the pub circuit, and even those weren't sold out.
But he is a great songwriter (he does both the words and music unlike Morrissey) and when he tours effectively as the Beautiful South (i.e. with one of their female singers), he/they can play to big crowds. The Beautiful South were one of the most successful bands of the 90s but Paul Heaton solo has never been anywhere near.

Pippistrella said:
Heaton is another champagne socialist like Billy Bragg.

Maybe but he's selling out arenas across the UK.
V

gordyboy9 said:
you don't want to know,the housemartins one of the worst groups in british history.
Click to expand...

Hey Thewlis, thanks for proving my point, marking all my posts as a troll, when the fact is, Paul Heaton has sold out loads of arenas when Morrissey can't sell out one!!
A

It'll take a little time.
A

Surface said:
Maybe not but Heaton has sold out the whole of Leeds arena (and most of the other dates on his arena tour along with Castlefield Bowl) whereas Morrissey hasn't even sold out the 60% of the capacity they have made available.
Click to expand...

Don't you mean Paul Heaton and Jacqui Abbot.
He has an OK voice - distinctive but nothing near Morrissey's class as a singer or songwriter.
T

Skinny and all the sad anonymous thats also u .... Heaton is virtually talentless... Limited vocalist ... Duff lyricist ....school boy stuff for people who are still schoolboys ... not an insight in sight ... Artless as it gets... Housemarttins Beautiful South Solo ... Of its time never to last rubbish ...... stuff of no artistic worth and a tosser to boot .. Hugh was the talent
A

Surface said:
Yep, fair play to him, he has single handedly sold out the 28000 capacity Cruel World Festival - the man is phenomenal.
Click to expand...

He's the headliner at the 28.000 capacity Cruel World Festival
A

Butlins! If he dresses as a housemartin!

Surface said:
Hey Thewlis, thanks for proving my point, marking all my posts as a troll, when the fact is, Paul Heaton has sold out loads of arenas when Morrissey can't sell out one!!
Click to expand...

That's because Heaton's faux-left opinions coincide with those of the mass media who tell us exactly how we should think.

Break the liberal-captitalist rules of our Stasi media and you will pay.

In fact you'll have an army of braindead social media morons screaming WAAAYYYSSISS!

Young And Alive said:
One swallow doesn't make a summer.
Click to expand...

Great title for a Moz song.
A

anyone come across the lyrics yet?

Paul Heaton seems like a really decent, smart, nice genuine man. I saw a documentary about Top Of The Pops recently and Heaton was interviewed. He showed his diary where he wrote the day he was told the Housemartins would make their TOTP debut.
'Caravan of Love' was denied the Christmas #1 in '86 by the shite Reet Petite. The Housemartins returned to Hull downcast, and played in their local RSL club (club for old ex army/service men and women) on Xmas Eve. They got a standing ovation and Paul realised it was better than any Xmas number 1.
A

Pippistrella said:
That's because Heaton's faux-left opinions coincide with those of the mass media who tell us exactly how we should think.
Click to expand...

It's nothing to do with that. It's because Heaton sings with a female member of the Beautiful South. It was only the duets (or the songs sung only by women) when the Beautiful South had major success. All the singles sung only by Heaton dived rapidly out of the chart, a bit like Morrissey's, and he never had the cult appeal of Morrissey as a solo act. But Heaton is a arguably more impressive songwriter as he writes the music as well.
A

Surface said:
Hey Thewlis, thanks for proving my point, marking all my posts as a troll, when the fact is, Paul Heaton has sold out loads of arenas when Morrissey can't sell out one!!
Click to expand...

Thewlis has not been to see Morrissey since 09. he/she is a creature and half. If Morrissey was found to be touching kids and dogs, they would exonerate him by some mad bullshit
Weirdo
You must log in or register to reply here.

Morbid thoughts on Morrissey and Marr?
2

Jun 20, 2021
BonfireOfMorrissey
B
A
Listen back to Morrissey’s live cover of a Paul Weller gem, The Jam’s ‘That’s Entertainment’