Update: Sam has just written in his facebook page (comment in the photo post) it was not him driving the car and he was not in italy at the moment. What the hell?

This is getting more and more ridiculous.

Sam Esty Rayner Photography Facebook comment (July 7):
The Italian newspapers state, on behalf of Roma Polizia, that the driver of the car was Sam Esty Rayner. 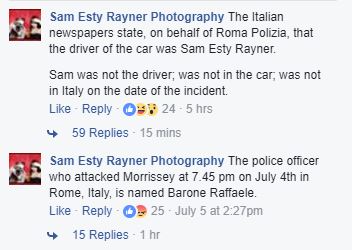 Link posted by an anonymous person:

Morrissey claims he was ‘terrorised by police officer who drew his gun’ - Metro.co.uk

The state police website claimed Morrissey had an attitude from the outset and was astonished he had not been recognised.

It added police were eventually able to identify him after making further inquiries.

Morrissey told Metro.co.uk: ‘Yes, I had an attitude – of someone being provoked. I do not expect anyone anywhere to know who I am. If this is all the police can say in their defence, then you must draw your own conclusions.

‘If this can happen to me on a busy, daylight street in Roma, then Italy places itself right up there with Syria in terms of moral stability.

‘With armed psychopaths free on the streets of Roma, then incoming migrants will soon be storming Italian borders to get back to Libya.

‘Italy’s ranking as 126th most dangerous country in the world has now shifted to number 1.’

the one he left behind

Ketamine Sun said:
yup, someone makes a public statement about how their life was threatened and then gets called a 'drama queen'.

*whoosh*
"all the people I like are those that are dead"

"I love you Moz!" So when did you last see your psychiatrist, hmm?
"Yesterday. She said it was okay. She loves you too oo."

Cornflakes said:
No, it really doesn't, and the idea that the officer intended to kill Morrissey is just clearly absurd. According to Morrissey, the guy spent 30 mins with his hand permanently glued to the handle of his gun as if he were about to draw it. This doesn't ring true. The officer would have looked ridiculous, and if he'd have wanted to draw Morrissey's attention to the fact that he was armed there are plenty of less weird ways he could have done it.

On the other hand, it's believable that a police officer would raise their voice if someone is refusing to co-operate with them. The only reason to doubt this is that Morrissey has said it. But, you know what? If having a police officer shout at you causes you to fear for your life, don't start an argument with a police officer.

'and the idea that the officer intended to kill Morrissey is just clearly absurd.'

Well, obviously it wasn't 'absurd' to him. He was there, he felt there was a strong possibility that he could be shot.

'According to Morrissey, the guy spent 30 mins with his hand permanently glued to the handle of his gun as if he were about to draw it. This doesn't ring true. '

'The officer would have looked ridiculous,'

Officers look ridiculous all the time, so it would have been hard to tell.

'and if he'd have wanted to draw Morrissey's attention to the fact that he was armed there are plenty of less weird ways he could have done it.'

I didn't get in reading his statement that just the officer's shouting is what caused M to fear for his life.
And I wonder if M was even arguing with him? As in, shouting back at the cop.

Anonymous said:
That's not the only thing that was blown
Click to expand...

Yes you're right! I think Boz did put some clarinet on the new album.

"...to say the things he truly feels
And not the words of one who kneels..."
A

What's with the bullshit about Syria and Libya? Come on...

How old is SER?

Anonymous said:
How old is SER?
Click to expand...

gll22 said:
What's with the bullshit about Syria and Libya? Come on...
Click to expand...

Dramatic exaggeration which morrissey does a lot though we all do it. I once grumpily complained in a meeting with a regional supervisor that one of my bosses was running the store I worked in like nazi Germany and I wasn't being entirely literal. Just trying to make a point
A

Devious, Truculent and Unreliable.....said the Italian Police Officer when asked about Morrissey's account of the altercation.

Anonymous said:
Maybe Diesel was at the wheel.

It's quite possible Diesel is taking the blame for his Lord and master. He's been in the tank for Morrissey for years.
"All you people ought to be like me / Drink that good cold whisky and let the cocaine be."
A 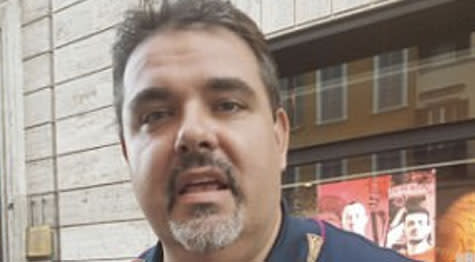 Was he with Gelato, the speed loving Italian playboy?
A

Maybe all the Valium has caught up with old crankfraud. Losing 3 days in the middle of recording world peace and now this (and all the rest).

The show is over and it must not go on.

moekay said:
Was he with Gelato, the speed loving Italian playboy?
Click to expand...

possibly, he heard that gelato was spotted in the pizza joint in Rome and sped over there, Sam behind the wheel full speed.
record company is probably figuring out a way to cancel the contract BEFORE it was known there was a contract.
You must log in or register to reply here.