On the first day of sales, Morrissey has sold seventeen thousand tickets for his Mexico City show at the Sports Palace. 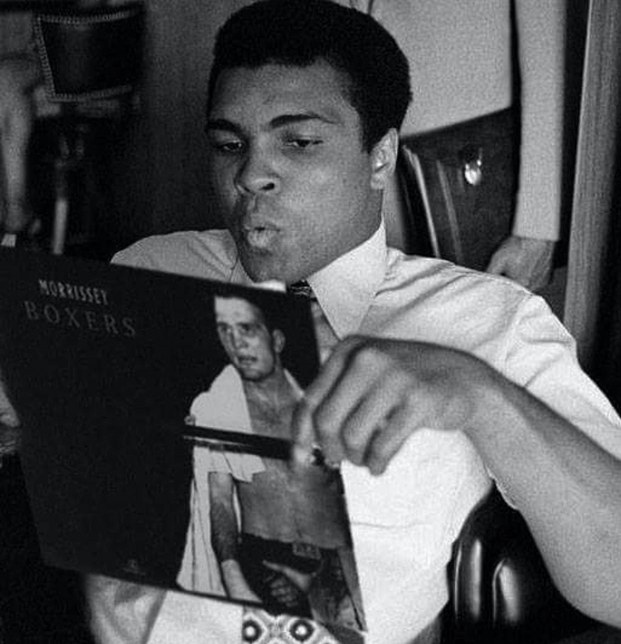 above photomontage by Moses S. Valiente.
Click to expand...

Quando quando quando said:
All reggae is vile.
And then he does Redondo Beach.
Click to expand...

Trump is vile.
Then he sticks his tongue up Nigel Farage's backside.

You have to admire than man for being consistently inconsistent!

I reckon Redondo Beach by Patti Smith was in the CD player when Uncle Steve picked up Aunt Nancy for their first date for lunch and all day spa treatment at The Sunset Marquis and then a night time outdoor summer movie at Hollywood Forever, so it is sentimental to Moz. Reckon the rest is history!

I reckon me like Bob Marley even though he was half white and he played kickball, which killed him.

Congrats with the ticketselling
[SIGPIC][/SIGPIC]

celibate said:
would love to hear 'Boxers' or Sunny'' live, it's been a while...

I'm glad he's selling tickets and all... but it's really pathetic that he feels the need to press release (and I use that term lightly given his chosen medium) every instance where he sells well. At this stage of his career, he should be above that sort of thing.
A

As a devout Muslim, didn't Muhammad Ali hate humasexuals like Morrissey though? Pretty sure he would have decked his white ass had they met.

Ketamine Sun said:
All reggae is vile except when it falls into the same category of some of M's favorite records. He must have had another reason for making such a comment other than stating to the world that he's racist ... think even M is smart enough to know that wouldn't help his record sales or improve his public image.

According to Johnny Marr, the Bob & Marcia song, 'Young, Gifted and Black' , had an influence on 'Girlfriend in a Coma'.

Anonymous said:
Trump is vile.
Then he sticks his tongue up Nigel Farage's backside.

You have to admire than man for being consistently inconsistent!
Click to expand...

don't know 'bout the tongue bit, but yes I agree M is one complex and beautiful individual.
"...to say the things he truly feels
And not the words of one who kneels..."

Anonymous said:
As a devout Muslim, didn't Muhammad Ali hate humasexuals like Morrissey though? Pretty sure he would have decked his white ass had they met.
Click to expand...

The term/word 'humasexual' wasn't coined yet. But that doesn't mean humasexuality didn't exist at the time. Most likely individuals that needed or wanted to label themselves might have used words and terms that were around at that time(though likely not satisfied with the terms available,and invented their own,we'll never know). We don't know if Muslims are against humasexuality, I guess we'll find out after more and more individuals/coming generations feel that the term/label humasexuality suits them.

AztecCamera said:
"all reggae is vile"
Click to expand...

All Aztec Camera posts are vile.

'Despite his gibe about reggae, made to the NME in the 1980s, Morrisey picked a ska track - Swan Lake by the Cats - when he curated a compilation of music for a series devoted to famous artists' influences.

Commenting on his choice, he told the music magazine Word: "I once said, 'Reggae is vile,' did I? Well, several tongue-in-cheek things were said in those days, which, when placed in cold print, lost their humorous quality.

"This track, along with Double Barrel and Young, Gifted and Black, were staple teenage necessities to me."

He added: "Anyway, annoying the NME always has value."

almost 52 years old, so blame me that I've did not do a good search.

If anyone is selling 2 spare tickets to Palacio... I'm buying.

You must log in or register to reply here.

A
TTY: MEXICO CITY - sold out and Morrissey comment; photomontage
2