The Warner Theatre was the site of a unique phenomenon on Saturday night. No, not the scores of Morrissey fans who lunged their arms toward the stage with the hope that the iconic singer would simply reach down and touch them. It wasn't even the sweat stain on the back of Moz's shirt that was the shape of a perfect heart. (Broken many times over, no doubt.)

It was the fact that this show -- by a performer who is most famous for fronting a beloved British rock band that broke up more than two decades ago and is nine albums into his solo career -- was not at all an exercise in nostalgia. The best moments were tracks from "Years of Refusal," the latest success in Morrissey's comeback trilogy, and showcased a vitality that most veteran performers can only dream of.

Songs such as "Something Is Squeezing My Skull," "It's Not Your Birthday Anymore" and "I'm Throwing My Arms Around Paris" were among the most appealing during the 90-minute set that gave true believers plenty of reasons to swoon but probably didn't add too many new, fully-fledged members to the cult of Moz.

While the five-piece band, centered around guitarists Boz Boorer (Morrissey's longtime collaborator) and former Red Hot Chili Pepper Jesse Tobias, was putting an extra charge into the muscular rockers that populate his recent albums, the 49-year-old singer did his Morrissey thing as only Morrissey can -- and should -- do.

His singular, dramatic croon, once a seemingly perfect match for a gentle guitar jangle, now sounds just as natural on top of crunching power chords. He sang with authority as he added flourishes to some of his sharpest barbs. He lassoed the mic chord with his usual gusto, played to his adoring minions and even curled into a fetal position after a particularly massive version of the Smiths hit "How Soon Is Now."

Another pair of Smiths chestnuts, "This Charming Man" and "Ask," were given crisp, alt-rock makeovers, but it wasn't an evening for big sounds only. In fact, Boorer strapped on an acoustic guitar for a number of quieter tunes, with affecting versions of "Death of a Disco Dancer" and "Seasick, Yet Still Docked" proving that Moz's tender side is still firmly intact.

Despite a string of canceled gigs earlier in the week blamed on strep throat, Morrissey seemed in both good health and spirits. His stage banter was the usual collection of brief non-sequitirs -- "At the Warner, you have been warned" or "So you see, it's not Justin Timberlake. Are you disappointed?" -- and he twice ripped off his shirt to reveal a sculpted torso and arms, which are surely in their current state thanks to a heavy regimen of baby lifting.

After a tidy, 20-song set, any number of hits could have been chosen for the encore, but "First of the Gang to Die" was a fitting choice. While not from the new album, the 2004 single helped jump-start Morrissey's current revival. And like many of the other songs performed Saturday, while it may not be that old, it's well on its way to classic status nonetheless.

All photos by Kyle Gustafson

Take me out tonight...

thanks for posting this. I went to HS with Malitz
I am a simple man...not much to gain or lose...and I don't know why I held out so long for me and you...
P

i loved the show!

Never moon at a werewolf!

A good review of the Warner show from the Washington Post, and some cracking photos too!

Not Right in the Head

Re: Good review of Washington show

Yeah, he was, for a very short time. 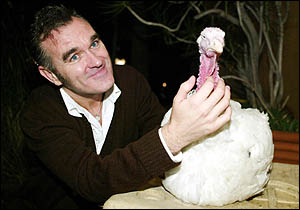 Love Morrissey, but hate most Morrissey fans? Then this is the FB group for you.
​

Not Right in the Head

Re: Good review of Washington show


laughing_anne said:
I just looked it up in wikipedia. I had no idea! I'm still laughing.

Have you seen the MTV clip of him with long hair in the 90s?

Love Morrissey, but hate most Morrissey fans? Then this is the FB group for you.
​

Were they pretty easy on the cameras?

I stood behind one of the photographers! We joked about how getting crushed must be part of her vocation.
She gave me her card and here are some of her photographs from the show.

http://www.flickr.com/photos/faithdesired/
You must log in or register to reply here.

Las Vegas Weekly: "Should Morrissey Fans Allow His Ugly Recent Rhetoric To Affect Their Love Of His Music?" by Geoff Carter (August 26, 2021)
4 5 6