What are you watching on hulu, Netflix, etc?

It was a couple of years savings I went on a spending spree with.
Don't worry, I'm just schizophrenic.

A couple of years savings?

The Chameleon said:
That's $50 in real money. You could have bought a shoe.
Click to expand...

Yes I could have bought a cheap shoe, and I did, buy loads of them. I gave most of them away. Years ago.
Don't worry, I'm just schizophrenic.

The Chameleon said:
A couple of years savings?
Click to expand...

Oh you're broke now and the days of giving stuff away are over? I might have to drop you.

The Chameleon said:
Oh you're broke now and the days of giving stuff away are over? I might have to drop you.
Click to expand...

I better work then. ttyl

The Chameleon said:
yeah, well... I believe @Peppermint that it was actually some kind of conspiracy against real writers with actual talent.
Click to expand...

Oh, come now. It's not like you to be snide.

I just wanted to get you to post in the pigsty.

The Chameleon said:
He said that because he was trying to avoid the death penalty. He tried to blame pornography because he wanted it to be a defense. That was once he'd been convicted of at least one of the murders. There were several separate trials and some were happening at the same time. He also pretended once that he was very concerned about all the victims that would continue to be murdered because of the fact that he was innocent.
I used to have this book. It's pretty good because it's about the trial more than about the gory details. But it goes into his personality and he was an asshole in case that isn't obvious. 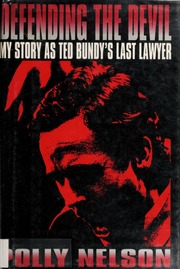 Polly Nelson goes on about herself so much.
Don't worry, I'm just schizophrenic.

Light Housework said:
Polly Nelson goes on about herself so much.
Click to expand...

I had this as a paperback book and I lost it so I haven't read it in a long time but I remember it being about her struggles to keep the trial moving forward. It's more about the trial than about Ted Bundy and I thought that was really interesting. They wanted her to just give up. He was clearly guilty and she couldn't win but she was doing it for everyone else who would be accused of a death penalty crime just to make sure that they exhausted every resource. She was young and didn't have much money or resources and had a hard time getting cooperation. I remember at one point she has two court appearances scheduled at the same time in different places and has to explain she can't be in two places at the same time.
I really thought her story was interesting and more interesting to me than Ted Bundy's story. People like that get so much attention but they should just be hung from the nearest tree and forgotten. I don't think studying them prevents others from happening but probably does make it easier for others to be caught.

none of that twee shite

Part of it is that I've already tried to watch the American series of the type I might like but I usually do not like them. I tried watching The Wire which is supposed to be great and it was so focused on this one cop that I didn't like that I couldn't stand it. And all the dialogue for the black characters sounded like it was written by someone whose knowledge of that kind of environment was limited to listening to a few rap records.
But it is a little more than that. Most of the foreign things I've seen on netflix seem to be more independent and also because I'm watching foreign films and series on American netflix I'm probably being recommended or even limited to things that already have been recognized for their quality.
This morning I watched a German movie called Stereo that was really good. It's a crime drama but it's really a psychological thriller. One bonus is that Rainer Bock who was Werner Ziegler on Better Call Saul is in it.

The trailer is a little misleading. It does have action but there is time to try to work out what is going on with "Erik" who seems to be suffering from a hallucination. He is being followed by a man that no one else can see.

I tried watching this thing called "The Debt Collector" but I could tell from the description it was probably formulaic crap and it was. I gave up after about ten minutes.
You must log in or register to reply here.