Difference between revisions of "Kristeen Young" 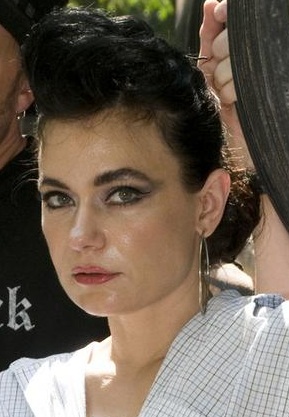 NONE OF THIS INFORMATION IS CITED. Born near St. Louis, Kristeen Young was abandoned by her birth parents and placed up for adoption at the age of three. The half-Apache, half-German Young was adopted by a grocer and a hairdresser from the suburb of Affton. Young's adoptive parents were Christian fundamentalists, which often set them at odds with one another. While in her teens, Young discovered the piano. She found music to be a refuge from the rules and restrictions she had thrust upon her during her adolescent years. Piano and voice lessons led her to attend a high school for the performing arts. She would later graduate from Webster University with a degree in music theory and composition.

Following graduation, Young found her niche in St. Louis' independent music community. After some early experimentation, Young formed the band Nov. 9th in 1992. The band subsequently released the album Waiting Like Witch Doctors. However, Young's sound was evolving and she grew displeased by the trappings of a full band.

By 1994, Young had moved on from Nov. 9th and formed the band WaterWorks. WaterWorks was scaled back to one drummer and one guitarist giving them the raw sound that Young had been seeking. WaterWorks, like Nov. 9th, only yielded one album, their self-titled debut, before disbanding in 1995.

Without a band, Young supported herself by working as a waitress at a local restaurant. Eventually, she formed a new band with the dishwasher, drummer "Baby" Jeff White, and released her solo debut, Meet Miss Young and Her All Boy Band. The record became a strong favorite on college radio playlists, its collection of songs frequently lurking in regions of unresolved personal trauma and emotional unease, although sometimes expressed within a deceptively upbeat musical context; inevitably, comparisons were drawn between Ms. Young and various other female vocalist/pianists, but all of these comparisons failed to account for this sinister intensity bristling at the heart of her music. Young and White have worked together throughout most of the past ten years, and now refer to themselves as a band called KRISTEENYOUNG rather than a solo performer with backup.

After her self-released second album Enemy in 1999, Young and White relocated to Lancaster, Pennsylvania, where, joined by bassist Brian Ion, they continued their rigorous East Coast performance schedule. By 2001 she had made a move to the state of New York, managing to take up residence in Manhattan the following year. Using homemade costumes and props to deliver a wry commentary on American consumer culture (an approach displayed on her first album, the cover of which depicts her wearing a dress constructed out of plastic Wonder Bread bags) in combination with an intense delivery of her songs, Young slowly built a strong regional following, but the location of her music outside of corporate music trends and the incestuous nature of mainstream rock radio continued to hinder a wider-spread exposure.

Later the same year, Young sent a demo CD to renowned producer Tony Visconti after randomly picking his name out of a music-industry directory. Visconti, known for producing such acts as David Bowie, T. Rex, The Moody Blues, and Morrissey, would later claim he "was on the phone to her before the CD ended."

With Visconti now on board, Young began writing her third LP Breasticles. In preparation for the album, Young played a series of small gigs and clubs such as the famed CBGB trying to find the right sound (either performing with a full band, alone or accompanied by Baby Jeff).

During recording sessions, Kristeen contributed keyboard and vocal work for selected tracks on David Bowie's Visconti-produced album Heathen (2002). Returning the favor, Bowie performed a duet with Young entitled "Saviour" which would appear on Breasticles (2003). The album was released by N_Records in Portugal, who held a release party for Young in Lisbon at the Saint Louis Theater. Portuguese band Micro Audio Waves opened for her. She continued to promote Breasticles with appearances throughout Portugal, London, and New York City. Despite the strength of the material (and the added benefits of a stunning package realized by NYC designer Howard Forbes, the duet with Bowie, and the appearance on Heathen), the obscure Portugal-based release of the record and a lack of proper distribution prevented a national breakthrough. The album, however, yielded one single - "Touch Tongues".

In 2004, Young released an album called X, about the Ten Commandments. The structure of the record is fairly loose, and allows for some songs written in character, as well as others that discuss a commandment directly. Though Young's official description of the album is that it is a series of arguments against the Ten Commandments, she has added in interviews that X's morality is more neutral, and intended to reflect a post-religious reality. The album's opening track "No Other God" features a duet with Placebo's Brian Molko.

2006 saw the release of The Orphans, an album which represents a return to Young and White's original stripped-down sound, minus the guitars and effects present on X and Breasticles; the resulting album relies almost entirely on piano, synth, White's distinctive and aggressive drumming and Young's operatic vocal. The album marked Young's third with producer Tony Visconti. To Young and White's specifications, the album was mixed to sound like it was recording live giving it a more "raw and powerful" feel to it.

While Visconti was producing Ringleader Of The Tormentors he introduced Morrissey to the music of Kristeen Young. Morrissey in turn signed her to his Attack label. "Kill The Father" and "London Cry" were subsequently released as singles in the UK. Young supported Morrissey on the Tour Of The Tormentors MMVI. Mid-tour, Young lent her vocals to the B-Side "Sweetie-Pie" on Morrissey's "I Just Want To See The Boy Happy" single. Later in 2007, after opening for Morrissey once again on his Greatest Hits tour, Young contributed the vocal intro on the Morrissey single "That's How People Grow Up", produced by Jerry Finn in Texas. The song was debuted on The Late Show with David Letterman on 29 June 2007.

Young was fired in October 2007 from the Greatest Hits Tour after she made comments onstage about the former Smiths vocalist. As a retort to an audience member who called out for Morrissey during her set, she said, "Morrissey gives great head...I mean cunnilingus." Young has since issued a statement explaining that the statement was part of her performance and not meant as an insult. Despite the incident, Morrissey invited Young, amongst other performers, to support him at the 02 Wireless Festival in Hyde Park, London on 4 July 2007. KRISTEENYOUNG headlined the MTV stage at the event sharing billing with other notable headliners such as Siouxsie Sioux, The New York Dolls, and Beck. Young followed the show with a tour with Ted Leo & The Pharmacists in the latter half of 2007. She also was featured as "Playgirl Of The Month" in the April 2008 issue of Playgirl Magazine. Young contributed backing vocals to Anti-Flag's 2008 release, The Bright Lights of America (featured mainly on the song "If You Wanna Steal (You Better Learn How To Lie)".

In April 2011, the EP, V the Volcanic was released on US iTunes. Scheduled for a wider release on 2 May 2011, the EP, once again produced by Tony Visconti, consists of 7 songs that are each inspired by fictional and "unlikely" movie characters. The press release describes Young's desire to "restore the piano to its rightful place alongside the guitar as one of the most fearsome instruments in the rock music pantheon."