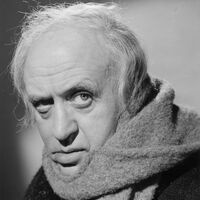 Alastair George Bell Sim, CBE (9 October 1900 – 19 August 1976) was a Scottish character actor who began his theatrical career at the age of thirty and quickly became established as a popular West End performer, remaining so until his death in 1976. Starting in 1935, he also appeared in more than fifty British films, including an iconic adaptation of Charles Dickens’ novella A Christmas Carol, released in 1951 as Scrooge in Great Britain and as A Christmas Carol in the United States. Though an accomplished dramatic actor, he is often remembered for his comically sinister performances. After a series of false starts, including a spell as a jobbing labourer and another as a clerk in a local government office, Sim's love of and talent for poetry reading won him several prizes and led to his appointment as a lecturer in elocution at the University of Edinburgh in 1925. He also ran his own private elocution and drama school, from which, with the help of the playwright John Drinkwater, he made the transition to the professional stage in 1930. Despite his late start, Sim soon became well known on the London stage. A period of more than a year as a member of the Old Vic company brought him wide experience of playing Shakespeare and other classics, to which he returned throughout his career. In the modern repertoire, he formed a close professional association with the author James Bridie, which lasted from 1939 until the dramatist's death in 1951. Sim not only acted in Bridie's works but also directed them. In the later 1940s and for most of the 1950s, Sim was a leading star of British cinema. They included Green for Danger (1946), Hue and Cry (1947), The Happiest Days of Your Life (1950), Scrooge (1951), The Belles of St. Trinian's (1954) and An Inspector Calls (1954). Later, he made fewer films and generally concentrated on stage work, including successful productions at the Chichester Festival and regular appearances in new and old works in the West End.