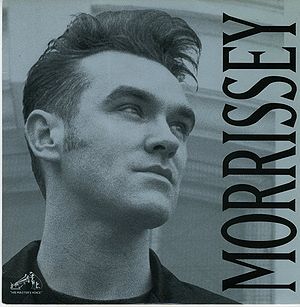 As stated by Alain Whyte via the Your Arsenal Twitter Listening Party (April 26, 2020), this was the second song Alain ever wrote for Morrissey.
The original Union Jack lettering on the cover was changed prior to release. A proof sheet featuring how it was first intended to look was sold on Ebay (2014):

And when I swing it
So, it catches his eye
Weren't you there?
- You'd have died!

Their clothes are imitation
George the 23rd
Don't you find this absurd?

Runouts are stamped except for "WHY BOTHER TO KEEP CLEAN?" and "Townhouse", which are etched.

"Certain People I Know" is a song by English singer-songwriter Morrissey, released in December 1992 as the third single from his third studio album, Your Arsenal (1992). It was the third and final Morrissey single to be produced by glam rock musician Mick Ronson. Reaching number 35 in the UK Singles Chart, the song had the distinction of being Morrissey's lowest-charting solo single up to that point. "Certain People I Know" was the first Morrissey single to be released following the singer's bottling off stage at the Madstock festival when he supported Madness and the subsequent NME story regarding his alleged racism. This led to the single cover being changed from featuring the singer's name spelt out in the colours of the Union Jack to plain black writing.