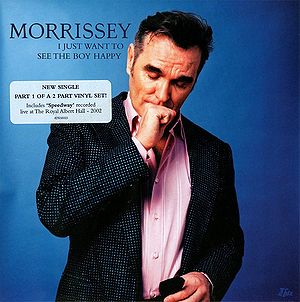 And I just want to
I want to see the boy happy
With some hope in his pale eyes
Is that too much to ask?

Lord, these words I beg of you
As I kneel down at my bed
Let's face it, soon I will be dead

And I just want to
I want to see the boy happy
With his arms around his first love
Is that too much to ask?

And I just want to
I want to see this boy happy
Why is this such a bad thing?

Attack Label Manager: Jennifer Ivory at Sanctuary in London. With thanks to Joe Cokell at Sanctuary Records Special Thanks To CANAL+ - L'ALBUM DE LA SEMAINE

Limited to 1000 copies. Housed in a clear wallet (PVC sleeve) with hype/info sticker on it.

Made in the EU. All runout characters are machine stamped. Tracks are numbered sequentially across the release.

"I Just Want to See the Boy Happy" is the fourth and final single from the album Ringleader of the Tormentors by Morrissey. The single was released on 4 December 2006. The title track was written by Morrissey and Jesse Tobias. Released the day after Morrissey began a five date arena tour in the UK, the single performed respectably, considering it was the fourth off the album, peaking at number 16 in the UK Singles Chart. Described by NME as "Mozza at his mic-lead whipping best", the track received largely positive reviews, with the Manchester Evening News awarding it a 5/5 mark and declaring the song "reminiscent of his early work with the Smiths, this is an excellent single." "A 12" picture disc of the track was released on 22 January 2007 which included all the B-sides on one disc and was limited to 1000 copies.