Kiss Me A Lot is a song that appears on Morrissey's tenth solo album, World Peace Is None Of Your Business. The song was produced by Joe Chiccarelli and co-written by Jesse Tobias.

The official music video was posted by Sam Esty Rayner on YouTube, 5 April 2015.[2]

In October 2015, Sam Esty Rayner posted a series of photos that appear to have "Kiss Me A Lot" in different languages written by Morrissey. The Gina Lollobrigida with Sean Connery photo was used in concert. 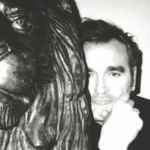 CD in plastic sleeve, often including four-pages of press/information, released to promote [r=6047296] in Japan. 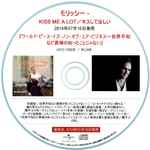 "Kiss Me a Lot" is a song by English singer Morrissey. It is the eighth track on his World Peace Is None of Your Business album and was released as the fifth single off the album via digital download on 26 March 2015, through Atom Factory. Of the release, Morrissey stated: "I humbly ask for all and any support with this download release, which, has always been waiting in the wings if not for unpleasant circumstances familiar enough not to be repeated here. Thank you to Atom Factory for making this happen, and here's to sound reason, good times, and music that matters."Furthermore, artwork for the download has been enhanced by Rob English at Atom Factory using a previously unseen photograph taken by Terry Richardson.On 5 April 2015, the official video for the song was announced on True-To-You, directed by Morrissey's nephew, Sam Esty Rayner. (Rayner had previously appeared as a young James Dean in his uncle's video for the song "Suedehead".)