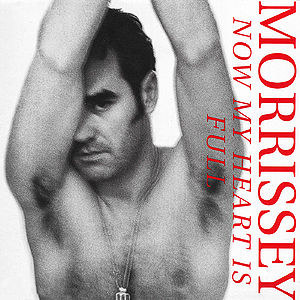 Tell all of my friends
I don't have too many
Just some rain-coated lovers' puny brothers
Dallow, Spicer, Pinkie, Cubitt
Rush to danger, wind up nowhere
Patric Doonan - raised to wait

"Now My Heart Is Full" is a song by British singer Morrissey from his fourth solo album Vauxhall and I. The song's refrain of "Dallow, Spicer, Pinkie, Cubitt" references the gangsters from Graham Greene's 1938 novel Brighton Rock and the film of the same name. In an interview published in Les Inrockuptibles in 1995, Morrissey stated "This song was the definitive expression of my change to adulthood, of my maturity. And, to be honest, I was very happy to be able to sing this text, to have reached this state. After this song I could perfectly retire: I've come full circle."Phoebe Bridgers named it to her list of five essential Morrissey songs, commenting, "This song best encapsulates Morrissey for me."