Pregnant For The Last Time (single) 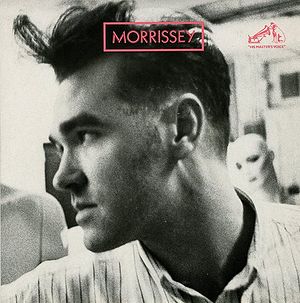 Phlegm lapels for the last time

Sick at noon for the last time And who is gonna clean up? Would you be so kind? Oh everybody's staring At the strange clothes That you're wearing

B1. Recorded somewhere in West London B2 and B3. Recorded live in Utrecht, Holland 1st May, 1991

Issued with a black poly-lined inner-sleeve. "Pregnant for the Last Time" is a song by Morrissey, released as a non-album single in July 1991. This was also the first time Morrissey worked with guitarist Boz Boorer, who has consistently worked with him to this day. The single reached number 25 in the UK Singles Chart.The B-side "Skin Storm" was originally written and performed by the band Bradford.