The More You Ignore Me, The Closer I Get (single)

From Morrissey-solo Wiki
(Redirected from The More You Ignore Me, The Closer I Get)
Jump to navigation Jump to search 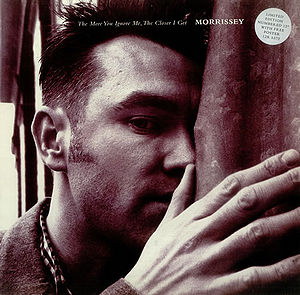 There is a US remix (3:47) of this track, although not circulated.

The main distributor was Parlophone, but it was available via Sire/Reprise (USA) and EMI/Parlophone (Australia).

Beware! I bear more grudges than lonely high court judges When you sleep I will creep into your thoughts Like a bad debt that you can't pay Take the easy way and give in Yeah, and let me in Let me in, let me, Let me in

A sticker on the sleeve reads: Limited Edition Numbered 12" with free poster 12R 6372.

Numbered release (printed on the back). Made in the UK. Custom cardsleeve with photo used on CD only here. Only other appearance on an official release is the 7" promo. "The More You Ignore Me, the Closer I Get" is a song by Morrissey, co-written by Boz Boorer released as a single on 28 February 1994. It was taken from the then-unreleased Vauxhall and I album and was the first Morrissey single to be produced by Steve Lillywhite. The extra B-side "I'd Love To." features Kirsty MacColl on backing vocals. Reaching number eight on the UK Singles Chart, the single became Morrissey's first top-ten hit since "Interesting Drug" in 1989. It is also Morrissey's only charting single on the US Billboard Hot 100, reaching number 46, and it became his second and most recent Modern Rock Tracks number-one hit. The song also reached the top 50 in Canada, France and Ireland. It was most successful in Iceland, where it reached number two for three weeks.