Morrissey listed Vince's song "The World's Loneliest Man" #1 in his list of "Singles To Be Cremated With" From Headful Of Heroes - NME (1989).
A limited 7" promo of "Glamorous Glue" featured the song as the B-side. 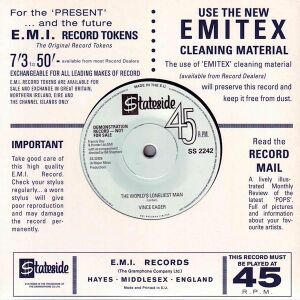 The master of the morose, who is at the Capital FM Arena on March 13, chose Vince Eager’s 1960 single The World's Loneliest Man as his No. 1 in a list of Songs To Be Cremated With.

And his fascination with the song has led to him checking into hotels as Vince Eager and even releasing the song as a b-side on his own single.

“I find it all quite bizarre,” says Vince, 74, who lives in Radcliffe-on-Trent.

Vince Eager (born Roy Taylor, 4 June 1940) is an English pop singer. He was widely promoted by impresario Larry Parnes, but later quarrelled with him over his commercialising of Eddie Cochran's tragic early death. Eager has since appeared in cabaret and on the West End stage.