Morrissey began the recording of World Peace Is None Of Your Business on 1 February 2014 in France with producer Joe Chiccarelli. On 7 March 2014 it was announced that the forthcoming album was finished and provisionally set for a late June/early July release through the Harvest Records label.

World Peace Is None Of Your Business was released as a digital single on 13 May 2014. The single peaked at #83 on the UK charts.

World peace is none of your business
you must not tamper with arrangements
work hard and sweetly pay your taxes
never asking "what for?"
ooh you poor little fool
oh you fool

Issued in a plain, die-cut sleeve with sticker on back. Barcode, FBI anti-piracy warning and manufacturing information printed on sticker.

1000 copies pressed with copies sold in the USA being numbered. 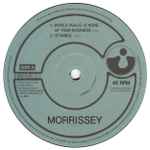 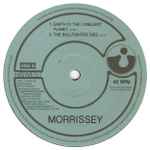 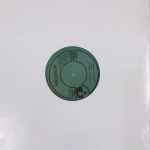 "World Peace Is None of Your Business" is a song by English singer Morrissey. It was released on 13 May 2014 as the first single from his tenth studio album of the same name (2014), through Harvest and Capitol Records. The single was accompanied by a music video, directed by Natalie Johns. The song was recorded in France with Morrissey's touring band which features guitarists Boz Boorer and Jesse Tobias, bassist Solomon Walker, drummer Matthew Walker and keyboardist Gustavo Manzur and was produced by Joe Chiccarelli, who is known for his production work for Beck and The Strokes.Due to changes in global music consumption, the physical versions of the first four singles from this album were released together as one 10" vinyl. The song was previously debuted live on 7 May 2014 at the San Jose Civic Auditorium in San Jose, California.